BitClout: The End Of Censorship Where Everybody Is Their Own Currency

Just when crypto and blockchains couldn’t get anymore confusing, let’s add to the mix the latest crazy idea…
a social media platform where anyone (who wants to), gets to monetize themselves.

The self-dubbed “Crypto Social Network”, BitClout is already taking a swing at simultaneously decentralising both money and social status. Or are they? In many ways, it sounds like people are now for sale. And all without a moderator in sight.

Anybody else getting some  Black Mirror vibes?

"BitClout is a new type of social network that lets you speculate on people and posts with real money, and it’s built from the ground up as its own custom blockchain. Its architecture is similar to Bitcoin, only it can support complex social network data like posts, profiles, follows, speculation features, and much more at significantly higher throughput and scale. Like Bitcoin, BitClout is a fully open-source project and there is no company behind it — it’s just coins and code." (BitCoin Whitepaper)

So what does that mean for Average Joels like you and me?
Can we get our side profile minted on a coin like the Queen?
Something like that, yes.

How Does BitClout Work?

Let’s break this down in a way you’ll understand. BitClout is owned by its users, who use BitCoin to buy and trade tokens of their favorite creators or create their own coin.

First you sign up and buy some $BitClout. From there, you’ve got currency to play with and can surf the social platform – buying the coins of other users. At the same time you become the face of your own “creator” coin.

So say you’re a huge fan of Katie Perry. She’s got her own coin. And you can buy her coins. And if you’re really popular and like or reshare some of her posts, she might follow you back and even buy a coin of yours. Got it?

Essentially every person on the platform gets their own user-generated coin. These can be traded, sold, or whatever else you can do with crypto. These precious “creator coins'' are digitally minted instantly as you create a profile. (There’s even a creator coin leaderboard.) The value of each coin predictably goes up when users buy, and falls lower when they sell. 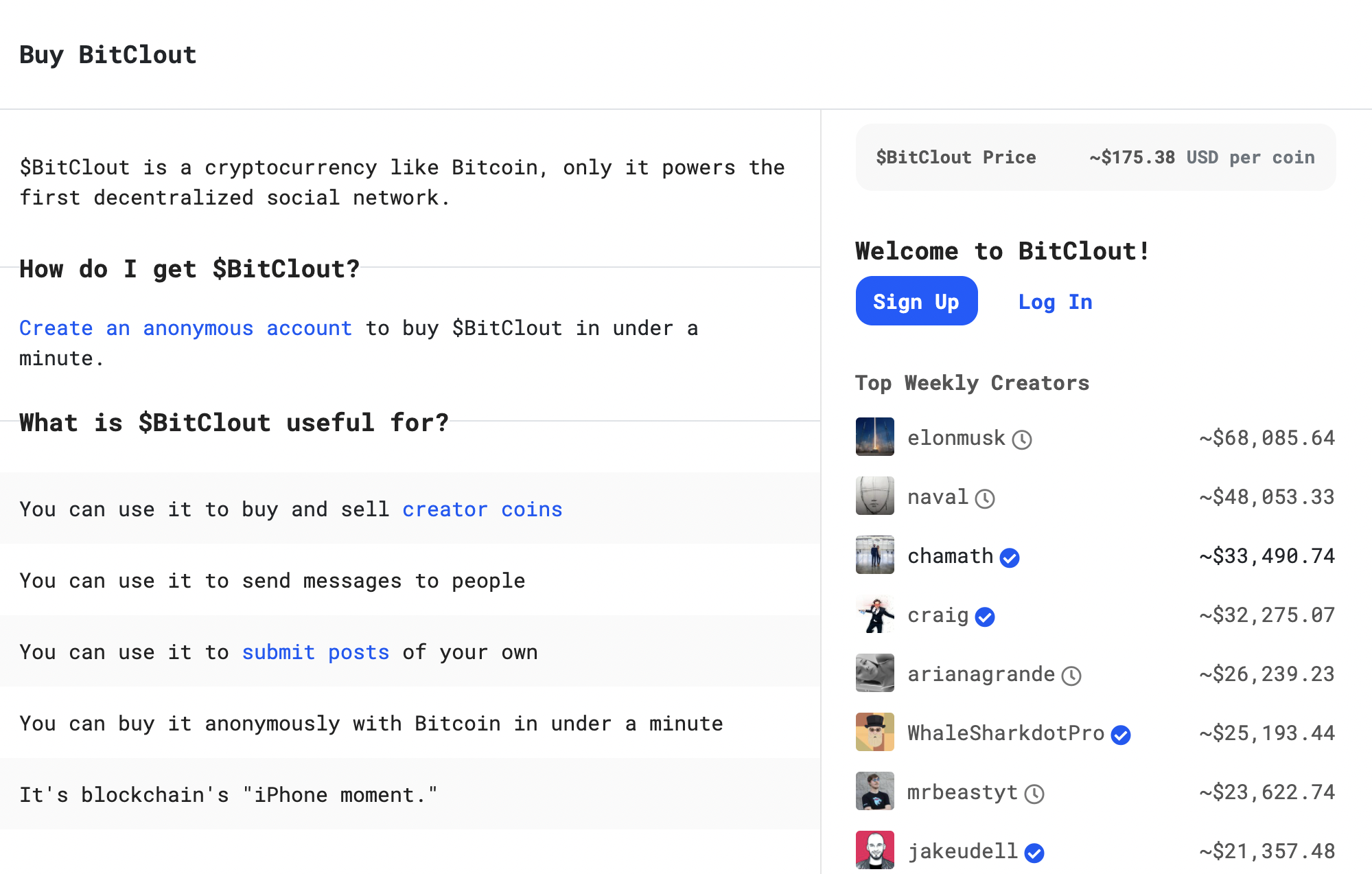 What’s This All Got To Do With “Clout”?

"If you can mix speculation with social media, you can have an amazing product. This will change the world for the better," says BitClout Lead Creator – who goes by the pseudonym Diamondhands. He’s an audacious dude, attempting to build a platform where street cred can equate to megabucks. (That’s worth some clout in itself.)

Already, profiles for the top 15,000 Twitter influencers have been pre-loaded into the platform, meaning you can buy and sell Elon Musk and Kim Kardashian coins – even if they’re not signed up. A bold move that’s caused some major backlash.

Whenever a coin hasn’t been yet activated by the influencer,  you’ll see a clock icon next to their name. Interestingly, these influencers have to make a public tweet to accept and activate their coin. It’s all very transparent, like everything else in crypto land.

Anyone can follow any given account—as you would on Twitter or Instagram—but owning a user's coin means you also share an asset that is hypothetically tied to that person's public reputation.

Diamondhands adds, “All the positive things you put out in the world will cause people to like you and buy your coin. You can monetize pent up enthusiasm for you, and let fans ride the rocket ship with you."

But How Does BitClout Make You Money?

Think of it like the stock market. If you’re convinced someone is about to hit some big time popularity  – and their coin isn’t yet worth much – you might stock up. Then when their “clout” skyrockets, as will the value of their coin. Cha-ching.

The same can be said if a user does something stupid – their social clout deflates, people start selling the coins and the value drops.

Or better yet, you feel like you’ve got a great idea for a page and want to directly monetise it? Then create the page, post your content and watch the coins price rise. As the creator yourself, you’ll also receive a percentage of all future coins purchased.

Is BitClout Connected To BitCoin?

You use BitCoin to buy into $BitClout. And while you're permitted to buy and sell Creator Coins, your own included, at any time within BitClout – you can't cash out just yet...

At the time of writing this article, the platform is only 3 weeks old – but it’s common for crypto projects like this to have an initial lock-in phase.

Who can possibly say. It’s a brave new world out there on the blockchain. And whether it’s a real contender to the recent craze of NFTs, BitClout deserves a solid look as one of the most ambitious crypto projects to date, and one that could foreshadow the future of social networks.

As if there wasn’t enough superiority complex in the world, it does feel a tad dangerous that humans can now be thought of as currency. But on the other hand, there’s huge potential for it to be a platform that eliminates media-buying and ad space from social enterprise. Quite literally, the end of internet censorship.

Do you think we’ll be following with heightened curiosity and dipping our feet in?
Absolutely. (In fact, we already are.)

Shopify SEO: How To Optimise Your Shopify Store for Google Success

How To Choose The Best eCommerce Platform For Australian Brands